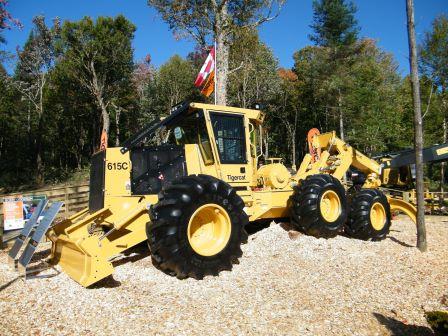 The impressive benefits of the Efficient High Speed system are fully explained to us.

When Tigercat entered into the skidder business in 1996, it was a unanimous company decision to do so using the very same drive train concept of an engine, a pump drive gearbox to drive the hydraulic pumps and a Tigercat hydrostatic transmission to pass the power on to the front and rear drive shafts, as they so successfully had done with their wheeled feller bunchers. Without the aid of modern day electronic controls, Tigercat had to run the engine RPM at a constant speed in order to make things work, and while the desired result of being able to drag more wood and reduce operator fatigue were achieved, the fuel consumption of the Tigercat 630 skidder was seen as a negative.

When Tigercat were able to introduce electronic and computer control systems into their C series skidders in 2000, the playing fields were never to be the same. Being able to provide a hydrostatic drive skidder to the market place that behaved like a direct drive skidder with regards to the favourable fuel consumption performance, and drag trees like a hydrostatic skidder, proved to be what the market place was yearning for. Well not quite!

The design team and the customers loved the improvements, but when stacked up against the competition, the common thread comment was about the Tigercat skidder top speed while returning to the woods empty, especially on a long skid. Rumours were rife about how other skidders, while not being able to pull more, were “lapping” Tigercat skidders so many times during the day that the advantage of the hydrostatic drive in being able to drag more with the smaller 604C and 610C skidders per load were nullified. In the larger 620D, 630D and 635D skidders, Tigercat were still well ahead of the game due to the higher payload advantage.

So the Tigercat product group, while developing things like two models of the six wheeled version of a skidder with Tigercat designed bogies and axles, and the revolutionary Turnaround® seat, they also came up with yet another innovation to address the speed issue.

Enter Tigercat’s EHS™ (Efficient High Speed) transmission in 2012. The benefits of the EHS™ for skidding are explained in simple terms as follows. When a load of trees has just been grabbed and the skidder begins to try and pull away, the optimum pulling power (better termed as tractive effort) is required to overcome the weight of the load, as well as the skidder, plus frictional forces, in order to get things moving. This means that the two hydrostatic motors driving the transmission will be at maximum displacement, providing optimum torque and full tractive effort to the wheels. Speed at this stage is of little consequence and this is exactly what the EHS™ provides in an optimal fashion, without the wheel spinning that one commonly sees with direct drive machines, especially in poor underfoot conditions. Once the initial resistance is overcome, the skidder now needs to move at a comfortable or appropriate speed and the EHS™ does this all for the operator, without him or her having to do anything. The same two hydrostatic motors can have an infinitely variable range of “gears” that can constantly trade between torque and speed depending on what the conditions require as the load is dragged to the landing or roadside. Once the load is dropped, the skidder now makes its return empty and while it has a decent top speed in its original design format, the perception was that this was not fast enough.  To this end, the EHS™ transmission design, using sophisticated electronic control, a clutch mechanism and the same hydrostatic drive motors, allows one of the motors to be disengaged on the fly when maximum speed is required and torque is of little consequence. Being able to disengage one motor has allowed the Tigercat skidder to increase the top end speed by some 6 kmh (4 mph), which has become the significant requirement to further outperform competitor skidders. A further significant piece of information of the EHS™ system that was discovered when being tested, was exactly how much of the time the skidder does in fact need to be in two motor mode when needing torque, and single motor mode when needing speed when on a typical skidding job site. What this design has further translated to is significant fuel savings for the customer due to this efficient system. Of further significance that was discovered was in certain skidding conditions (flat terrain or downhill) even when fully loaded, the EHS™ transmission remained in single motor mode, again lending itself to fuel savings.

Tigercat first tested and introduced the EHS™ on the smaller 604C, 610C and 615C skidders, but are now going to offer it on the rest of the skidder product range in the near future. This EHS transmission comes into its own in relatively flat terrain or long skid trails, providing for higher productivity and lower fuel consumption than ever before. Source: Gary Olsen (International Sales Manager: Tigercat); www.tigercat.com