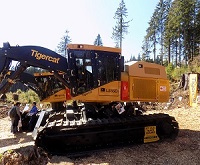 The machines can be configured for either Tier 2 or Tier 4f.

Tigercat has extended the release of the D-series shovel loggers to all markets. The S855D series shovel loggers can be used as a versatile solution for steep slope and sensitive site logging applications. The LS855D is a powerful carrier suited to felling, pre-bunching and shovel logging on steep terrain. It is commonly equipped with a feller director boom and the Tigercat 5195 directional felling head for felling and shovel logging. Alternatively, the carriers can be equipped with a live heel boom system and grapple for pure shovel logging. Along with the high flotation undercarriage, this configuration is well suited to southern US style log mat-based lowland logging applications. The S855D series shovel loggers can forward timber to roadside on steep or wet soil conditions up to distances of 80 to 100 m (260 to 330 ft). A shovel logger can be strategically located in difficult parts of the stand to forward trees to the skidder or fell and bunch for a yarding system.

The H855D series harvesters are available with two-piece or telescopic ER boom systems. Tigercat’s patented ER boom technology allows the machine operator to extend and retract the boom on a horizontal plane smoothly and quickly using a single joystick. The stick boom or ‘reach’ joystick controls both the main and stick booms simultaneously, resulting in the attachment moving either away from or toward the operator. The main boom and tilt functions operate in the traditional manner to adjust the height and angle of the attachment. For steep slope applications, the LH855D features Tigercat’s patented leveling system, which gives good stability in steep slope applications. Due to the unique geometry of the leveling system, the machine is well balanced on slopes. The ramped undercarriage, where both the front idler and the rear gearbox are set higher than the centreline of the undercarriage, allows the machine to easily drive up over rocks and stumps. Source: one and two