Rottne Introduces New Forwarder Cranes Which Are 20 Per Cent Stronger 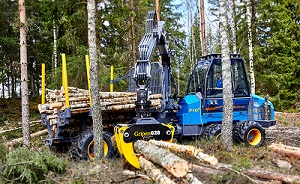 The RK 105 is an innovative crane for the Rottne F10 and F11 forwarders.

The crane is significantly different compared to its predecessor, the RK 85. The new jib arm crane for the Rottne F10 and Rottne F11 provides 20 per cent more lifting force than its predecessor. Behind the idea of the new knuckle boom crane, lies a strategy that has resulted in a completely new and improved product. The three main parts that have been redesigned compared with the old crane are the mast, the lift cylinder and the lifting arm. The result is a completely new crane with increased strength. The key changes are a stronger mast, a new type of self-aligning bearing, new cylinder mounts and a stronger lifting arm. There is also a different approach to the assembly process.

The new crane is reinforced to give greater lifting force. The development work at the factory in Rottne has resulted in the RK 105 having a lifting torque of 105 kNm. This is compared to approximately 87 kNm on the earlier model. The lifting angle has also been increased by about five degrees. Rottne was able to reduce the stresses in the welds. The new RK 105 will be mounted as the standard crane on all F10D and F11D models delivered to customers from Rottne’s factory from around the turn of the year 2017/2018 and onward. Source