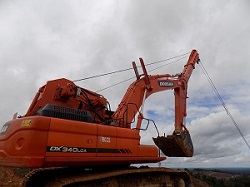 During 1997, the need for a South African Cable Yarding Safety and Operating Handbook was identified as being important to the South African forestry industry. The aim of the production was to help improve the safety and efficiency of local cable yarding operations. A great deal of literature was available at the time from many international sources but no single document satisfied South African specific needs. South Africa had a unique combination of terrain conditions, road spacing, tree sizes, cable yarder sizes and configurations amongst other variables.

Forest Engineering Southern Africa (FESA) responded by compiling the South African Cable Yarding Safety and Operating Handbook, which was first published in 1998. An updated second edition followed in 2001 which incorporated bundle anchor and standing tree anchor guidelines amongst other concerns. There have been significant advances in cable yarding technology over the last decade or so, necessitating the production of this the third edition of the Handbook. This edition has addressed issues such as the categorisation of cable yarders, the inclusion of guyless yarders, more carriage types, and common guidelines for wire rope selection as well as operational productivity indices. Minor changes and improvements were also made throughout the document. The editors are S Ackerman, A Immelman, A McEwan, S Upfold SJ and S Naidoo. The document, published in 2017, can be downloaded free-of-charge from the Institute for Commercial Forestry Research’s (ICFR) website. Source