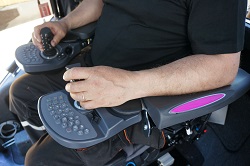 It is not all cosmetics though, as they also present a new control system and control panels.

Both the harvester and forwarder have black cabins. The forwarder also has a newly designed bumper and bonnet protection. The production of the black machines has started and the first machines with the new look will be seen during the Elmia Wood exhibition in Sweden. Logset indicate that the black colour never goes out of style and is easier to maintain. The old silver-grey cabin is no longer available.

The new look of the machines includes a new control system designed by Logset for both forwarders and harvesters, called Total Operation and Control 2 (TOC 2). The graphic design as well as the menus of the TOC 2 have been completely renewed to make navigation faster and even more intuitive. In addition to the renewed TOC 2 for the base machine, Logset has also developed a new measuring system for harvester heads, being the Total Operation and Control – Measuring Device 2 (TOC-MD 2). Both systems are Linux-based and they represent a new generation of the original programs.

Together with the new control system, Logset has produced new control panels. The new operating levers allow the driver to seamlessly interact with the machine’s control system and crane. The new operating levers for harvesters have 13 buttons on each handle, which means 26 buttons in total. The height and angle of both the wrist support and the palette can be adjusted separately. They are adjustable to different styles of driving. Source