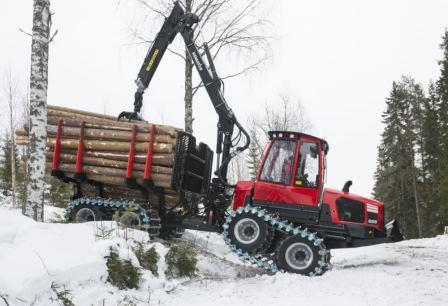 Individual bogie lift is now available for the Komatsu 855 forwarder.

The bogie lift is a forwarder option that has been available for more than 20 years and that is very popular, mainly in southern Sweden and Germany. Komatsu is now also introducing a bogie lift for the Komatsu 855, this time with individual bogie lift. The bogie lift function is available for the Komatsu 835 and Komatsu 845 forwarders, and is a practical function in several different contexts. An important application area is when operating on roads between felling sites. Chains are often used to prevent skidding, but because these can damage road surfaces, they must be removed prior to road operation between felling objects. With forwarders in southern Sweden, for example, conducting between 70 and 80 machine movements each year, it is costly to spend so much time mounting and removing chains. With the bogie lift, the chains can be mounted on the rear wheels of the front bogie and the wheel pair easily lifted during transport. This brings increased productivity and consequently increased profitability for the machine operator.

Another application area is when driving in steep terrain down to the landing. As the hill levels off, there is a risk of the machine’s nose scraping the ground, but with the bogie lift it is easy to compensate for this and lift the nose until the entire front section has come down on flat ground. There has been demand for the bogie lift option to be available as an option on more forwarder models. Now that the bogie lift is being launched as an option on the Komatsu 855, it will be with individual bogie lift. The new function entails that the right and left bogie can be individually controlled, something that gives the forwarder very good manoeuvrability when obstacles are encountered. This is important in areas when space in stands is restricted during thinning and when there are narrow access roads, where easily manoeuvrable machines are needed with good terrain handling properties, such as in southern Sweden and Germany.

If the forwarder is operating at an angle over an obstacle, the operator can choose to press down the front bogie’s rear wheel on the downhill side. This permits the tilt to be compensated to a certain extent and keeps the cab more upright, which increases both manoeuvrability and operator comfort. Source: http://www.komatsuforest.com/default.aspx?id=1848&newsid=151174