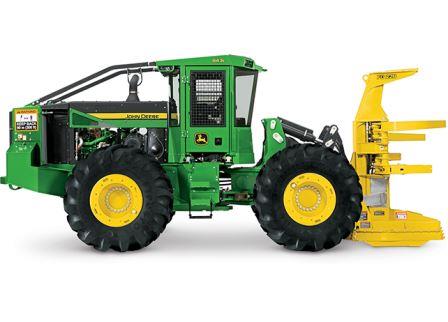 These include a good power-to-weight ratio for increased responsiveness during wet or steep terrain operating; a one-button Quick Dump which allows operators to simply press a button to open both the accumulating and grab arms, simultaneously releasing the trees from the pocket; the head-tilt and arm functions are combined into a single, smooth motion; there is increased stability when climbing hills and controlling trees through optimal weight distribution and a longer wheelbase; and there are now enhanced lighting options, where six high-intensity halogen lights are standard.

Operator ergonomics has also been focussed on, with the cabs being 25 percent larger and having a bigger front window. Sound levels have been halved inside the cab. Other features include a more efficient climate control system, more ergonomic controls and plenty of storage space. Joystick steering also reduces strain on the back and neck for less fatigue.

A simplified electrical system features a sealed switch module (SSM) that incorporates many cab switches in one location. There is an automatic turbo cool-down to maximize component life, there are larger pins and bushings on the boom and mast to extend pin life, and more robust lift and tilt hydraulic cylinders with heavy-duty wiper seals to minimize contamination. The L-Series machines are the first John Deere Forestry machines to launch with Final Tier 4 engines.  John Deere's L-Series wheeled feller bunchers are now available in the United States in a 643L and 843L model. John Deere also offers a choice of three different disk-saw felling heads for each model. Source: http://www.deere.com/en_US/corporate/our_company/news_and_media/press_releases/2015/forestry/2015apr1-l-series-wheeled-feller-bunchers.page?