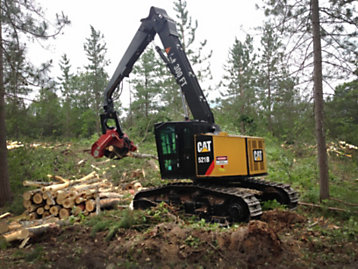 All models have been upgraded with the new Cat PRO (Parallel Reach Operation) system.

The Cat PRO system allows operators to complete a smoother, more fluid harvesting motion. One joystick either extends or retracts the harvester or felling head by combining both the main and stick boom functions. For feller buncher configurations, the head is kept level as well. The operator can efficiently move the head in a parallel motion relative to the ground. The Cat PRO System makes machine operation much easier for new and less experienced operators. They can learn the machine quickly and boost their speed and productivity because of the simplified joystick movements needed to fell a tree. The system also reduces operator fatigue. It can be turned on and off easily with a button on one of the joysticks or a button on the display. The system is adjustable for different applications and varying slopes. After a few small adjustments, the trajectory of the boom and the head tilt on a feller buncher configuration can be modified for applications on steeper slopes.

The machines also have new power management software tailored for the engine-hydraulic interactions that take place in a forestry application, helping improve machine performance. LED lights are fitted as standard equipment to the full line. These lights are more energy efficient, have a longer life span and improve visibility at night.

The entire line of tracked felling machines consists of two near-zero tail swing feller bunchers, the Cat 521B and 522B, and two full tail swing machines, the Cat 541 Series 2 and Cat 552 Series 2. The 522B and 552 Series 2 are levelling machines. The Series 2 and B Series machines are equipped with the 226 kW (303 hp) Cat C9 ACERT engine. Two or three hydraulic pumps, depending on the configuration, power the hydraulics to give loggers the best performance. This gives a strong combination of swing and lift capacity to increase production. The large amount of swing torque gives the operator the ability to swing large loads uphill. Large structures such as swing bearings and booms have been designed for longer life and durability. The 552 Series 2 features 345 excavator-size chain for increased durability on steep slopes. Other models have 330 track chain and rolling components. All machine models are offered with the option of star carrier rollers, which help with track retention and debris shedding in uneven terrain.

Both the B Series and Series 2 machines have a full 889 mm (35 in.) of ground clearance from front to back. This makes for a machine with high manoeuvrability that can easily climb steep slopes and clears obstacles such as large stumps and rocks. Both levelling models use a three cylinder levelling system, which Cat claims is the only one in the industry that provides two way simultaneous function throughout the full range of motion. The design of this system reduces stress loads into the carbody and roller frames. Key machine specifications are included in the table below. Source: http://www.cat.com/en_US/news/machine-press-releases/cat-track-feller-bunchers-and-harvesters-upgraded-for-faster-smoother-harvesting.html